City Government, Public WorksSewers are a vital part of our wastewater system

Sewers are a vital part of our wastewater system 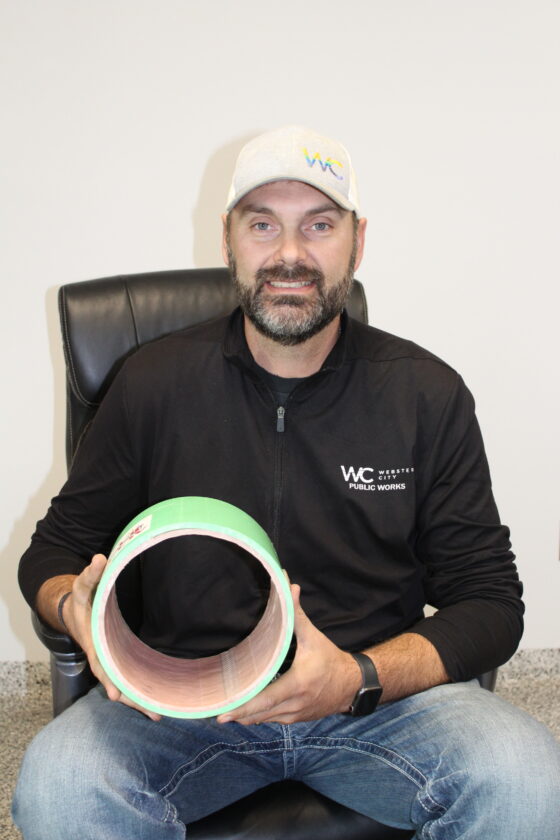 Sanitary sewers were used across the ancient world from Babylon to Rome to China. In Colonial America, sewers made of hollowed-out logs were built to capture rainwater, mainly to put out fires.

Cesspools and outhouses were standard “comfort facilities” until the 1850s when the nation’s first sanitary sewers were built.

The first sewers in most U.S. cities were typically “combined sewers.” They handled not only storm water, but sanitary sewage too. These sewers work fine in dry weather, but rainfall, especially hard or prolonged rain, can cause them to overflow, flushing sewage directly into lakes, or rivers, or causing it to back up in houses or businesses.

Brian Stroner, Environmental and Safety Coordinator for the City of Webster City, works with sewers in the normal course of his work, and over his career of 25 years has learned much about the history of local sewers.

“The stormwater lines were the first to be built,” he says. Sanitary sewers came later, but an exact date isn’t known.

Webster City, in a series of small projects, began separating its sewers years ago, but Stroner points to a focused effort that largely finished the job: “From 2006-2013, the storm and sanitary sewers were separated, but lots of places where storm water can enter sanitary lines remain today.”

Before 1939, when the city’s wastewater disposal plant opened, sewage and stormwater was dumped into the Boone River.

Webster City’s Street Supervisor Brandon Bahrenfuss and the crew of the Street Department maintain our sewer system today. And it certainly is a system, comprising 46 miles of sanitary sewers, 931 manholes, and three lift stations. A lift station has pumps to power wastewater to the wastewater plant.

As part of the new wastewater plant project, lift station No. 2, on the city’s east side, will be replaced. The new station will see new larger-capacity pumps and electrical power, as well as a back-up power source to ensure continuity of service. The new lift station will improve wastewater handling for Webster City Custom Meats and Mary Ann’s Specialty Foods, and residential customers on the east side.

It’s hard to know the condition of a 100-year-old sewer. Much can go wrong, including sunken pipe sections, which can cause debris buildup, broken or cracked pipes, and “channeled” pipes, in which water cuts channels in sewer pipes, permitting seepage and creating a weak spot where roots can enter.

Today, robotic cameras slowly travel through our sewers, documenting any flaws. The city hires a contractor to sweep the sewer network “every five or six years,” notes Bahrenfuss.

Sometimes, a major blockage is found, requiring use of a “jet machine,” a powerful hose with multiple water jets, to blast debris clear, and restore normal flows. When this happens, there’s a real chance sewage might back up into basements, a situation capable of creating thousands of dollars of damage and cleaning bills in minutes.

For that reason, in 2004, the city bought its own jet machine, which is on standby at the Street Department at all times.

What’s the most common cause of sewer failure?

“In older neighborhoods, its tree roots that cause the most trouble,” says Bahrenfuss. “Sewers run in the street right-of-way, and that’s where many trees are growing, so it’s a matter of time before sewers and roots meet.”

The tree roots are searching for water, so a sewer leak attracts them.

“The drought of the past few years has made matters worse,” says Bahrenfuss, “roots go deeper and farther to find water.”

A memorandum to the City Council of Webster City for the Aug. 1, 2022, council meeting from Biridiana Bishop, assistant city manager, and Daniel Ortiz-Hernandez, city manager, recommended applying for a grant to speed-up use of a material and process that could prolong the life of our sanitary sewers.

“As part of the plan to address aging sanitary sewer infrastructure, staff has been performing spot repairs, and Cured-In-Place-Pipe lining projects in conjunction with various road improvement projects,” according to the memo. “In an effort to maximize, and speed up, extending the useful life of the current sewer collection system, staff would like to pursue a sewer repair, and CIPP lining project, that would cover a larger portion of the community. “

Successfully used since the 1980s, CIPP feeds a flexible felt liner filled with resin (a polyester plastic) into the existing sewer line, where it’s cured by hot water or steam, inside the pipe. This new liner, smooth, strong and capable of minimizing root incursion, effectively rehabilitates the old sewer in-place. The work is then inspected by a robotically-controlled closed-circuit TV camera to ensure final quality.

The advantage of this technique vs. digging up and replacing old sewers is obvious, and has made CIPP a common practice across the country.

Working with the MIDAS Council of Governments, the city submitted an application for a Community Development Block Grant, requesting $600,000 to help pay for CIPP repairs, in time to meet an Oct. 1, 2022, deadline.

Speaking to the Daily Freeman Journal last week, Bishop confirmed “we won’t know if we’ll get the grant until the end of this year.”

If the grant money is received, it will help fund upgrades to the city’s sewers faster than would otherwise have been possible.