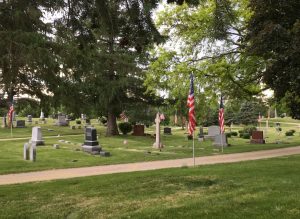 In 1865, Jacob M. Funk sold five acres of ground to the Home Cemetery Association which is the extreme east portion of the current cemetery. The officers of the association were: President, Kendall Young; Secretary, William A. Crosley; and Treasurer, L. L. Estes. Other board members were: George Shipp, Hiram Zellie, John Wolfinger, Jacob M. Funk, Benjamin Millard, David Beach, and Dr. Jesse R. Burgess. In one newspaper account, the cemetery was called “God’s Acre.” The first person buried here was Mrs. James Kelly.

The Ladies Cemetery Association, formed in 1881, planted trees and shrubs and laid out the roads in the new cemetery location. The Home Cemetery Association transferred control of the cemetery to the City of Webster City in 1883. Claus Brandrup was appointed Sexton and held that office for 35 years. Five more acres of land were purchased later from George Shipp.

On February 3, 1885, on behalf of the Winfield Scott Post, G. A. R., a strip of land fifteen-feet wide was purchased along the west side of the first ten acres for burial of war veterans. The Civil War dead were moved from old North Cemetery to this part of the cemetery.

In 1919, the currently-named Graceland Cemetery was created by an extensive addition to the west of the oldest part of the cemetery. It was platted by a landscape architect from Iowa State College in Ames.

Webster City founders and notables buried in Graceland Cemetery include Jackson Groves, who arrived in Webster City in 1856 and built the cabin attached to the Brewer cabin at the Wilson Brewer Park; a Civil War drummer boy at the battle of Shiloh, Charles Olmstead, who came to Webster City in 1867; S.B. Rosenkrans, Webster City pioneer who, in 1884, while drilling a well, found a flowing mineral spring on his property on the bluff at the east end of the Bank Street bridge and developed a park in the area which opened in 1885; Kendall Young, who in 1896 left his estate, valued at $150,000, to the city for the express purpose of building a free library; and MacKinlay Kantor, the Webster City native who was awarded the Pulitzer Prize for Fiction in 1956 for his 1955 novel, Andersonville.

CHARGES FOR INTERMENTS AND DISINTERMENTS*

For each grave space sold, 21% will be deposited into the perpetual care trust account.

Size might be slightly altered due to concrete fill material