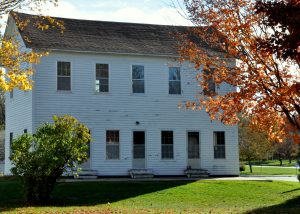 After the Civil War, Hamilton County was financially able to build its first Courthouse, a modest two-story wooden structure, on Webster City’s Public Square. The building was used from 1866 to 1876 until a more elaborate structure was built.

Costing $1,934, the building included three downstairs public offices with a second floor court room accessed by an outside stairway. News reports indicate the offices were not connected and could only be accessed through their front doors. A Diebold Safe vault at the rear of the build-ing housed public records.

There was no jail, but the middle ground floor room was used in the Spring of 1869 to hold twenty or so railroad workers arrested after a wild spree in Webster City. Their bosses bailed them out and took them back to finish laying the track which soon brought the railroad to town.

Also in 1869, the County held its first murder trial in the second floor courtroom. John Ross was accused of murdering his uncle John S. Ross, owner of Ross’ Mill which was located on the Boone River, six miles south of Webster City. He was acquitted and the case remains unsolved.

After a more prestigious courthouse was built, this wooden structure was sold and moved to the corner of Union and Bank Streets to be converted into private housing.

The Historical Society raised the funds to move the building to Wilson Brewer Park in 1985, where it was refurbished for use as a museum.