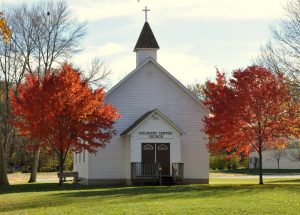 Early settlers, Mr. and Mrs. Phil Morris arrived from Wisconsin, where fruits and flowers grew in abundance.  Despondent, because the prairie was so barren, the Morris family sent to their home state for “Mulberry” trees. The “Mulberry  or Morris Farm” was the “center” of all kinds of social activity, including strawberry festivals, and quilting bees. It was only natural to name the community, church, and school house……Mulberry Center.

In 1889, a Building Committee was formed and it was decided to build a new church on the J.C. Miller Farm close to what would later be called the Stonega blacktop. Money was solicited, and two carpenters were to oversee the work done by members and friends; as they completed a one-room frame construction for $950, including labor.

The Mulberry Center of the United Brethren in Christ Church was dedicated July 13th, 1890.

On January 23, 1995 (after a $25,000 fundraiser that had to be raised in six months or the church would be torn down) the church was moved to the Wilson Brewer Park. August 25, 2012, a renovation of the interior of the church was completed. The sanctuary and foyer were painted, new draperies, carpet, foyer flooring and candle light fixtures were installed.

The church now provides Humanities Iowa presentations and has been proven ideal for weddings.

To learn more about the history of the Mulberry Center Church, click here to download historical facts.