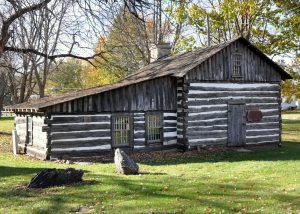 Wilson Brewer, Webster City’s first resident in 1850, built his cabin on the banks of Brewer Creek near the Boone River. The cabin was home to three more generations of the Brewer family before his grandchildren – Frank Bonebright and Harriet Bonebright Closz Carmichael – donated the restored cabin and surrounding land to the city in 1932.

The Jackson Groves cabin was built in 1856 about three miles south of Webster City and was added to the Brewer cabin by Frank Bonebright as a lean-to.

Wilson Brewer’s pioneer cabin, which had been sold many years before, ended up as a granary on the Peter Frohling farm northeast of Webster City. The Frohling family gave the original settler’s cabin to Frank Bonebright in 1931.

Frank Bonebright, a grandson of Wilson Brewer, was always a collector of old and unique items. He began his quest to preserve Webster City’s history and his family’s heritage in the early Twentieth century.With the acquisition of the two cabins, Bonebright began his mission to build a memorial to his grandfather.

After reconstructing the Brewer cabin and adding the Groves cabin as a lean-to in 1931-1932, Frank Bonebright stocked the structure with his massive collections of pioneer history. The Brewer-Groves cabin displays period household goods, antlers, horns, tools and farm implements collected by Brewer’s descendants to honor the City’s original settler. This is the original Bonebright Museum collection.