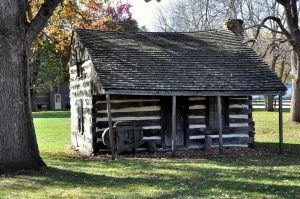 They lived with their parents, Alexander and Mary Ann Moore Jameson, until building this cabin in 1860.

Alexander and Mary Ann Jameson sent three sons – Charles, Jacob and Samuel – off to enlist in the Civil War in April 1863. All three joined the 7th Iowa Cavalry. Only one son came home.

Jacob B. Jameson died of meningitis May 6, 1863 while waiting to be mustered into the 7th Iowa Cavalry. He is buried in Rock Island National Cemetery.

Charles M. Jameson died of yellow fever May 24, 1864 while stationed with his company at Fort Riley, Kansas. He is buried in the National Cemetery there.

Samuel A. Jameson was discharged for disability for a fractured hip in October 1863 at Omaha, Nebraska and was pensioned in 1866. He married Elizabeth Jane Groves, daughter of Jackson Groves, whose cabin is also located on Wilson Brewer Park.

Various Jameson family members lived in this cabin until 1913. The cabin sat empty until acquired by Frank Bonebright, grandson of Wilson Brewer, and moved to the Bonebright home-stead, now Wilson Brewer Park, in the early 1930’s.

The Jameson Cabin was disassembled and moved to the Park from its site near Homer by Frank Bonebright in 1931. A collection of early day washing machines and the Brewer Family ox yokes is on display.