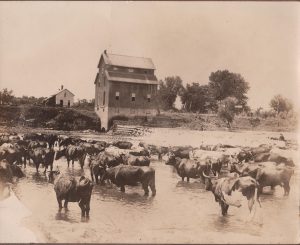 In June 1835, three companies of the United State Dragoons were the first non-natives to see what is now Webster City.  Commanded by Col. Stephen W. Kearney, the mounted soliders first reached the Boone River two miles east of its mouth, naming it in honor of Dragoon officer, Captain Nathan Boone, the son of Daniel Boone.

The first settler was Wilson Brewer, who built a cabin near Brewer Creek that has since been reconstructed.  The cabin stands near its original site at the Bonebright Depot Complex and Museum, which also features the first Hamilton County Courthouse, the second Illinois Central Railroad Depot, the Jameson Log Cabin, the Mullberry Center Church and the Harmony Schoolhouse.

Willson Brewer and William Frakes platted the town, which was originally named Newcastle, in October of 1854.  In 1855, Walter Willson purchased the Newcastle plat and in October of that same year, the post office was established.Newcastle was originally part of Webster County.  In 1855, Willson, who was then a state representative, helped to pass an act that divided Webster County into two counties, giving birth to Hamilton County.  Newcastle was renamed Webster City and became the county seat.

People Who Made History

Webster City is the only community in the nation that has produced two Pulitzer Prize winners. Webster City is the hometown of Pulitzer Prize winning authors, MacKinlay Kantor and Clark Mollenhoff.  Kantor, who was born in 1904, won the Pulitzer Prize from Literature with his novel Andersonville in 1956.  Kantor wrote more than 40 other novels, including God and My Country in 1954 about his experiences in a boy scout troop led by Murrary McMurray, which later became the basis for the 1966 Disney movie Follow Me, Boys. staring Fred MacMurray and Kurt Russell.
Clark Mollenhoff won the Pulitzer Prize in 1958 for National Reporting for a series exposing corrupt labor practices by the Teamsters Union.  Beyond being a journalist, he was also a professor and lawyer.  In 1969 he briefly served as special counsel to President Richard Nixon.  Mollenhoff wrote 12 books and an award bearing his name is given annually by the Institute on Political Journalism for the best investigative reporting article in a newspaper or magazine.

Products That Made History

Webster City’s manufacturers have a long history of producing products that grab the attention of the consumer.One such product is the Doodlebug Scooter, manufactured by the Beam  Manufacturing Company.  The Doodlebug was a motorized scooter produced between 1946 and 1948 that became popular during the gasoline rations of World War II.  The Beam Manufacturing Company later became Beam Industries, focusing on central vacuum systems. Naden Scoreboards are another historical product that came from Webster City.  Although no longer manufactured, Naden Scoreboards were first made in 1933 by a local shop teacher and have appeared in such venues as the Boston Garden.

In August of 1980, Dan Aykroyd visited Webster City, Iowa and promoted his new movie “Blues Brothers” by taking tickets at the Webster City Theater’s premeire of the film.  And, as a result of the Screen Actors Guild (SAG) strike, it was one of few such promotions for the movie.