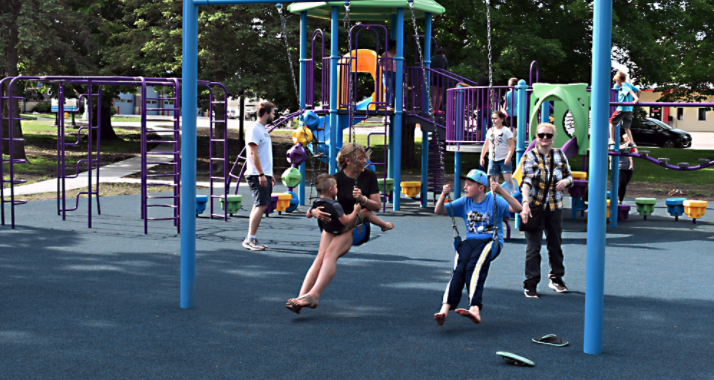 A Webster City park that was almost sold last year has found a new life and new vitality, thanks to donors, grant funds and the determination of local citizens who thought the park was worth saving.

Thursday afternoon, members of the public, parks and recreation commission members and city officials gathered to officially cut the ribbon, opening East Twin Park. The ribbon cutting was originally set for May 27, but rain and cold weather postponed the ceremony.

Last weekend, the city opened the park and its new equipment for public use.

Since then, East Twin Park’s new equipment has been getting quite a workout.

Children have sailed in the swings, raced down the slides and scrambled up and down the climbing pieces. Skateboarders cruise up and down the ramps while basketball players shoot half-court hoops.

In January 2020, the City Council considered selling the land where East Twin Park sits to a developer that was looking for a spot to build a store. The news of the potential sale spread through social media and the people turned out to voice their opposition to the sale.

The council listened and voted against selling the park.

Several citizens jumped into action, creating GoFundMe accounts, seeking out donations and starting up Facebook pages to share ideas for revitalizing the park.

“Honestly, it makes me so happy and proud of the community,” said Lindsay Henderson, community vitality director. “Without their outpouring of support and contributions, this wouldn’t have happened.”

A Wellmark Foundation matching funds grant, along with donations and in-kind donations, made the purchase of the new equipment possible. Local contractor Jeff Habhab donated his time and materials to help with the concrete work around the playground and fitness spaces, as well as sidewalks leading up to the spaces.

Henderson said every time she drives by the park it’s full of people of ages using the new equipment.

Larry Flaws, director of recreation and public grounds, said he was pleased with the revitalized park.

“This is just an example of how great people can get great things done for the community,” he said.

Mary Fortune is one of the local residents who has spearheaded fundraising efforts and pushed to get the improvements made. She regularly posts photos and information to the Webster City Twin Parks Revitalization Committee Facebook page.

“I’m thrilled that we got it done this fast and in the spring. That was my goal so the community could start using it while the weather was still nice. It was packed last weekend because the weather was so good,” Fortune said.

Fortune manned the scissors Thursday afternoon as the city officials, park commission representatives and community members cut the ribbon at the park. Fortune, a fitness instructor, also demonstrated the new workout equipment and explained the use of each machine.

She said that the work is not done at the park. There’s more to come.

“Now comes Phase II,” she said, adding that the next portion of the project will bring a yoga pad/pickleball court as well as the revitalization of the block shelter on the eastern side of the park.

A fund was established through the Enhance Hamilton County Foundation for the Friends of Webster City Parks and Recreation Fund. Information on donating may be found at http://www.enhancehamiltoncounty.org.

View the article as it originally appeared in the Daily Freeman-Journal.