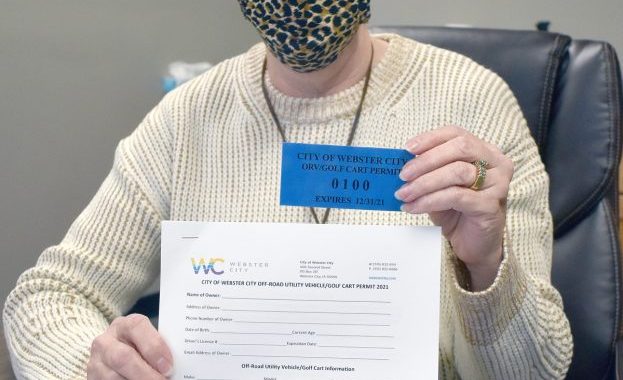 There are some new vehicles tooling around Webster City since the start of the new year.

Off-road vehicles, also known as side-by-sides, with at least four and not more than eight wheels, a steering wheel, headlights, tail lights and brakes, can now be driven on Webster City streets once. The city has begu to issue permits to operators who complete an application with the city, receives a permit and have valid insurance.

Karyl Bonjour, city clerk for Webster City, said the city started issuing permits for ORVs on Jan. 1. A local resident approached the City Council last fall with the idea, according to Bonjour.

“Zach Mussman, who kind of represented a lot of the users of the ORVs, asked the council to consider allowing side-by-sides to be used in town,” she said.

That started the ball rolling. City Attorney Zack Chizek drafted an ordinance, drawing upon his experiences with such similar rules and regulations in other communities. The ordinance also speaks to the use of golf carts on city streets.

“We went through three readings with the council and each time there were a few little changes,” Bonjour said.

The ORVs are now allowed to travel Webster City streets, with the exception of Superior Street and Second Street from Superior to Prospect Street. The vehicles are able to cross each of the streets at a 90-degree angle and must come to complete stops and yield to all oncoming traffic and pedestrians, according to the ordinance.

The vehicles would not be allowed to operate on any of the public trails, except where designated.

Those operating the vehicles must be 18 years of age, possess a valid driver’s license and proof of insurance, and have executed a valid application for a permit with the city. Bonjour said the permit sticker needs to be afixed to vehicle and the approved application must be carried in the vehicle.

So far, Bonjour said there have been about 35 permits issued for the ORV.

“I’ve got about 7 or 8 more on my desk awaiting approval,” she said.

Golf carts would, however, be able to cross those streets after coming to a complete stop and yielding to all on-coming traffic and pedestrians.

She said about four of the permits issued so far were for golf carts.

“Applications for golf carts will probably pick up more as we get closer to spring,” she said.

The annual fee for a permit is $25. The application form is available on the city’s website. It can be printed, filled out and dropped off in the city’s utility dropbox with the permit fee. Bonjour said once the application is approved, she could then mail the permit to the operator or they could make arrangements to pick it up at city hall.

Though it’s just a few days into the new year, Bonjour said she hasn’t heard of any problems or concerns with the ORV in the city.

“I heard they were out and about a lot last weekend,” she said. “I think everything is going well. I haven’t had any complaints. And we’ve had some positive feedback from the users. They are very appreciative of the council’s moving ahead with the ordinance.”