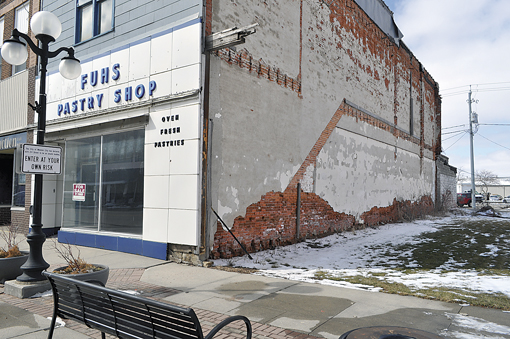 The City Council of Webster City will consider the future of the former Fuhs Pastry building located at 605 Second Street Monday night during the council’s regular meeting.

The council will meet in person at City Hall at 6 p.m., but the public can take part in the meeting by listening to the Facebook Live broadcast on the city Facebook page or by watching on Mediacom Channel 117.2. The public can also participate by logging into Zoom using the meeting ID 852 0540 8574.

The council bought the vacant lot next to the old bakery at the intersection of Second Street and Willson Avenue for $11,995 from Big Dawg Investments LLC, of Webster City.

In 2013, the council moved to erect unsafe building signs outside of the structure.

Also on Monday, the council will continue discussions of the proposed Cleanup/Dropoff event, tentatively scheduled for early October. The event, which in past years was held in June, was postponed due to safety concerns with the pandemic.

A resolution approving and confirming plans, specifications and form of contact and the estimate of cost for the Blake’s Auto Parking Lot Replacement Project will be on the agenda. The council is also expected to award the contract for the project to Habhab Construction at a cost of $41,511.

A request from the Waste Water Treatment Plant to purchase a Muffin Monster Grinder for the plant in the amount of $30, 040 will be considered.