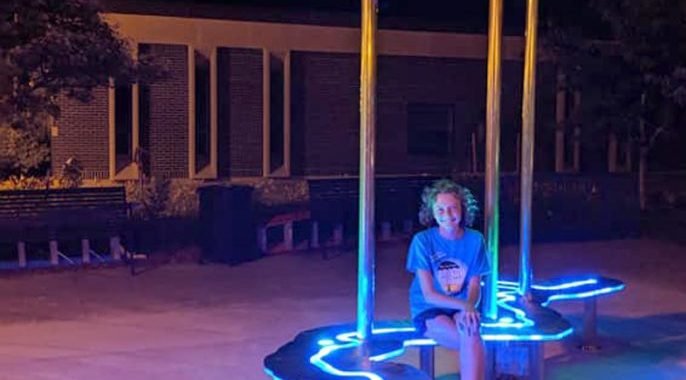 A unique new piece of artwork that was installed this week at the City Hall Plaza will offer a special view of the community whether seen during the day or at night.

The large stainless steel sculpture created by a University of Iowa art professor features a curved bench and a grid canopy overhead.

According to Lindsay Henderson, Webster City’s vitality director, the bench is the actual outline is of the Boone River as he meanders through the community. Encased in bench are blue LED lights which are visible at night,

“At night, when it’s lit up, the light emanates from the middle and from the sides of the bench, emitting a blue glow,” Henderson said.

The upper portion is the actual street grid of Webster City. During light of day, especially a sunny day, a shadow of the grid is cast downward onto the concrete pavement. Henderson said the most recognizable section is the Fairmeadow area with its winding streets. Green LED lights cast a green glow upwards creating a canopy over the river at night.

“It has a nature theme, but obviously its very special for Webster City because it’s our river and our streets — it’s our town,” she said.

“They put out a grant request covering many different types of projects. One of them was solar. At the time the Webster City partnership didn’t have any solar-based projects,” she said.

But in talking through ideas, Henderson said the idea of a solar-powered sculpture came up.

Dan Miller, an art professor at the U of I, volunteered his labor to build the piece. After reviewing several sites, City Hall Plaza was selected as the home for the sculpture.

Henderson said the partnership received a $4,000 grant for the project and from there, the University donated $5,000 from its foundation to help with funding. Henderson also applied and received a Hotel/Motel Tax Grant.

“Dan really came up with something that’s special to our community,” she said. “And this is a permanent installation and we hope it will be a nice engaging piece for the community.”

The solar panels to power the lighted piece are being ordered and will soon be installed near the sculpture. The panels will be tied to the grid, so as the panels are collecting solar power, it will actually offset a bit of City Hall’s energy costs, according to Henderson.

“With the murals down at the other end of the street and this piece so bright and colorful at night, it’s really a nice pairing for the community,” she said.