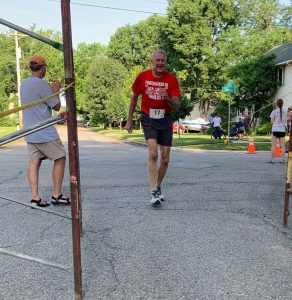 WEBSTER CITY – On the morning of Thursday, July, 4th, 130 people took to the streets of Webster City to participate in the 32nd edition of the Webster City Firecracker 5k.

Running under partly cloudy skies with temperatures in the low 70’s, Chase Bulten of Manson was the overall winner of the event, running a 5k time of 16:48.8. Abby Landwehr of Fort Dodge defended her 2018 championship by running a time of 20:49.4 to win the overall female title. Angelica Flores of Belmond earned the female masters title with a time of 23:54.4 and Lance Bergeson of Ankeny won the men’s masters championship with a time of 18:33.8. Bergeson’s time set a new record for the men’s 50-59 age division.

Two participants, Shirley Svenson and Arlo Van Diest, have participated in every Firecracker 5k since the race began in 1987. Svenson ran the course in 37:26.3 and Van Diest completed the race in 39:50.8

Thank you to all spectators, volunteers, the City of Webster City, and our sponsors for helping to create a special event for all participants.