CommunityMr. Mayor Helping others is part of his philosophy 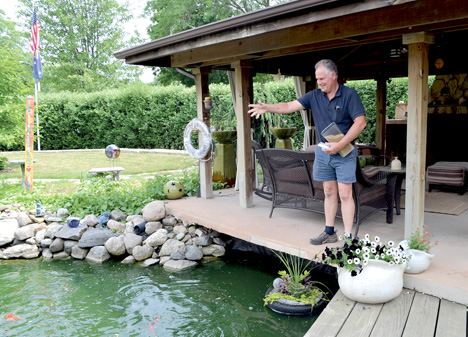 Mr. Mayor Helping others is part of his philosophy

Helping others is part of his philosophy

John Hawkins, an immigrant from Australia, is truly a jack-of-all-trades. From expanding his family’s business in Australia, to starting a new life and business in America, to becoming mayor in his small town, to being a father and grandfather, Hawkins seems to be able to do it all.

Hawkins was born and raised in Brisbane, Australia. Because of his parents’ busy work schedule, at the age of nine he was sent to boarding school. The things he learned at boarding school helped him greatly prepare for his future. Having a strict schedule forced him to become a very focused and driven individual.

Perhaps one of the most important lessons he learned at boarding school was helping people. If anyone was behind in their work or needed extra help, all other students were expected to help that individual. This carried through to his professional career. It is something ingrained in him.

While in Australia, Hawkins had five kids. Four with his first wife and one with his second. They are Craig, Peter, Simon, Michael and Travis.

By 1999, Hawkins had enough of working with his family and decided to move to the US and see what life was like there.

“I decided that things weren’t going the way I’d like them to keep steering,” Hawkins said.

He then made the leap to America and landed in Des Moines. He started working there as a truck driver. A friend then invited him to live in Stanhope because the rent was cheaper.

After moving to Stanhope, he and a friend decided to go to a blues band concert in Webster City. It was at that concert that Hawkins met his current wife Marcia.

The two married and he gained two daughters from Marcia’s first marriage, Ashley and Olivia. Hawkins then moved to Webster City. There, he started up his own transportation company called ‘Hawkins Industries,’ which now employs eight people.

Hawkins had no plans of ever running for city council in the beginning but was urged to by friends and community members. Being out on the road a lot for his trucking company, he decided that maybe if he became a council member, it would force him to stay home more often.

“I’m always used to being away from things,” Hawkins said. “You know, going to boarding school when I was nine was… you’d go away for three months at a time and not talk to anybody except for the people you’re at school with. I’m used to being by myself but I do miss my wife when I’m away so I decided that maybe that would force me to stay.”

Hawkins was elected as councilman in 2014 and continued as councilman for another two years. In the beginning he said he didn’t have much of a reason to be on council but after being there for two years, he did find things that he he would like to see the city achieve.

So in 2016, he ran for mayor and was elected. After becoming mayor, he got more involved and became more connected to the community than he had in the past.

Hawkins has now been mayor of Webster City for two terms. He lit up when telling about helping kids in the community.

“People keep saying to me, ‘you’re the hardest working man we’ve ever had’ and I just go, ‘I try to help.’ I can’t walk away from it. I have to help them because I have to help anybody in need. It’s just something I have to do,” Hawkins said.

As for the future, Hawkins is not sure whether he will run for another term or not, but Hawkins still runs his business, ‘Hawkins Industries,’ with one of his sons while being mayor. Three of his boys are still living and working in Australia, and another of his boys now lives and works in Minnesota. He makes time to go see his boys and their families each year.

When he’s not running a city, running his business, or taking care of his properties, he likes to garden with his wife and spend time with family.

Click here to view article as it originally appeared in the Daily Freeman-Journal.