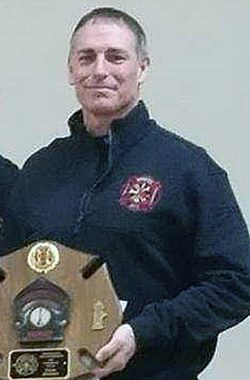 The award was presented at a ceremony held last weekend.

Madsen became a firefighter with the local department in 2005. He was later promoted to the officer position of lieutenant and has been a member that can truly be counted on, according to Stansfield.

“Because his employer allows him to respond to calls even while working, he is a very dependable member that you just know will be there at the call,” Stansfield said. “He is usually a group leader at emergency scenes where he can really use his knowledge and skills to lead fire attack groups and searches.”

Stansfield said that a few years ago, Madsen was one of the department members who saved two people from a fire. Madsen also assists regularly with teaching newer members on important firefighter skills.

“He has been one of our leaders during our live fire trainings that will stand at the door and remind our newer members what they need to be thinking and doing as they go in to conduct fire attack and search efforts,” the chief said.

“Webster City Fire Department along with our community is very fortunate to have such a dedicated member of our department. It is because of these reasons as well as many others that Lt. Todd Madsen was awarded the Firefighter of the Year award,” Stansfield said.

Three firefighters were nominated for the award by a group of their peers for 2019’s year of service. Dakota Feickert and Harrison Hayes were nominated along with Madsen.

“Dakota Feickert and Harrison Hayes put in a lot of work over this past year in taking more responsible roles within the department,” said Stansfield. “They are both relief on-call firefighters now and have taken on a larger responsible role in doing so. The department congratulates them on their continued growth as the future of our department.”