The City of Webster City has been investigating copper pinhole leaks that residents and property owners have been experiencing. The City is mindful of the concerns and frustrations residents have expressed and has been working diligently to try to identify possible causes and factors. We recognize that information and answers have not come quickly, a result of how complex and poorly understood this phenomenon is across the country. We wish to reiterate that the water has been and continues to be safe for drinking. This has been confirmed through testing and has been verified by experts and the Iowa Department of Natural Resources.

At the November 1st City Council meeting, residents and City Council members had the opportunity to hear directly from consulting engineer Gregory Sindt from Bolton and Menk and corrosion expert Dr. Marc Edwards from Virginia Tech regarding the issue. Dr. Edwards spoke on how on average he works with one to two communities across the country at a time navigating this phenomenon. Several communities have navigated this issue and have had minimal success in identifying the exact cause of the pinhole leaks.

Although there are no clear cause(s) of the copper pipe pinhole leaks that have been identified yet, the City continues to investigate the issue with Dr. Edwards and Bolton and Menk. Dr. Edwards and Bolton and Menk have also provided an initial recommendation for modifying the City’s water treatment process by switching from polyphosphate to orthophosphate. While no two water systems are the same, Dr. Edwards noted that some communities who have added orthophosphate to their water treatment process have experienced a reduction in pinhole leaks. The City began adding orthophosphate to the finished treated water on October 25, 2021.

Phosphates are used by many water treatment systems to help maintain water quality including to address inorganic contaminants (iron, manganese, and hardness minerals by inhibiting corrosion and scale, and also as a corrosion inhibitor. The change from polyphosphate have caused new technical challenges at the water treatment plant. Filters at the treatment plant are used to remove sediment and excessive solids from the raw water (groundwater). The change from polyphosphate, which was fed prior to the filters, to orthophosphate being fed after the filters are causing the filters to scale and plug up faster. This is requiring filters to be backwashed approximately every 40 hours compared to 140 hours before. The City is reviewing this issue and working to identify the possible solutions and combination in the treatment process.

The City’s water continues to meet all safe drinking water standards. In 1974 the Safe Drinking Water Act was passed by Congress to protect public health by regulating the nation’s public drinking water supply. It established national health-based standards for drinking water to protect against both naturally-occurring and man-made contaminants that may be found in drinking water. The Iowa

Department of Natural Resources (DNR) is responsible for implementing the Safe Drinking Water Act in Iowa and any additional or more stringent regulations it chooses to enact.

The investigation and information being reviewed is not limited to the last 12-24 months, but looking at three or more years in an attempt to identify the cause(s). One recent change that has been identified is a switch in coagulant used int the water treatment process. Coagulants are used in water treatment systems to remove suspended solids, some metals and dissolved silica. This change occurred in June of 2021; however, reports from local plumbers indicate pinhole leaks began to occur prior to this change.

Dr. Edwards and Bolton and Menk have not determined whether any of these changes in the City’s water treatment process may have been factors attributed to the pinhole leaks.

Information regarding the change was provided in the July 2018 edition of the Webster City City Scene, copy included on the next page: 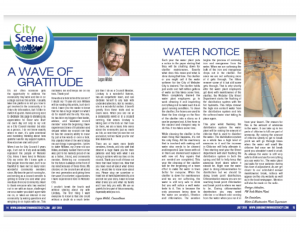 The City also referenced this change in the 2018 and 2019 routine maintenance notices/press releases released to the public: 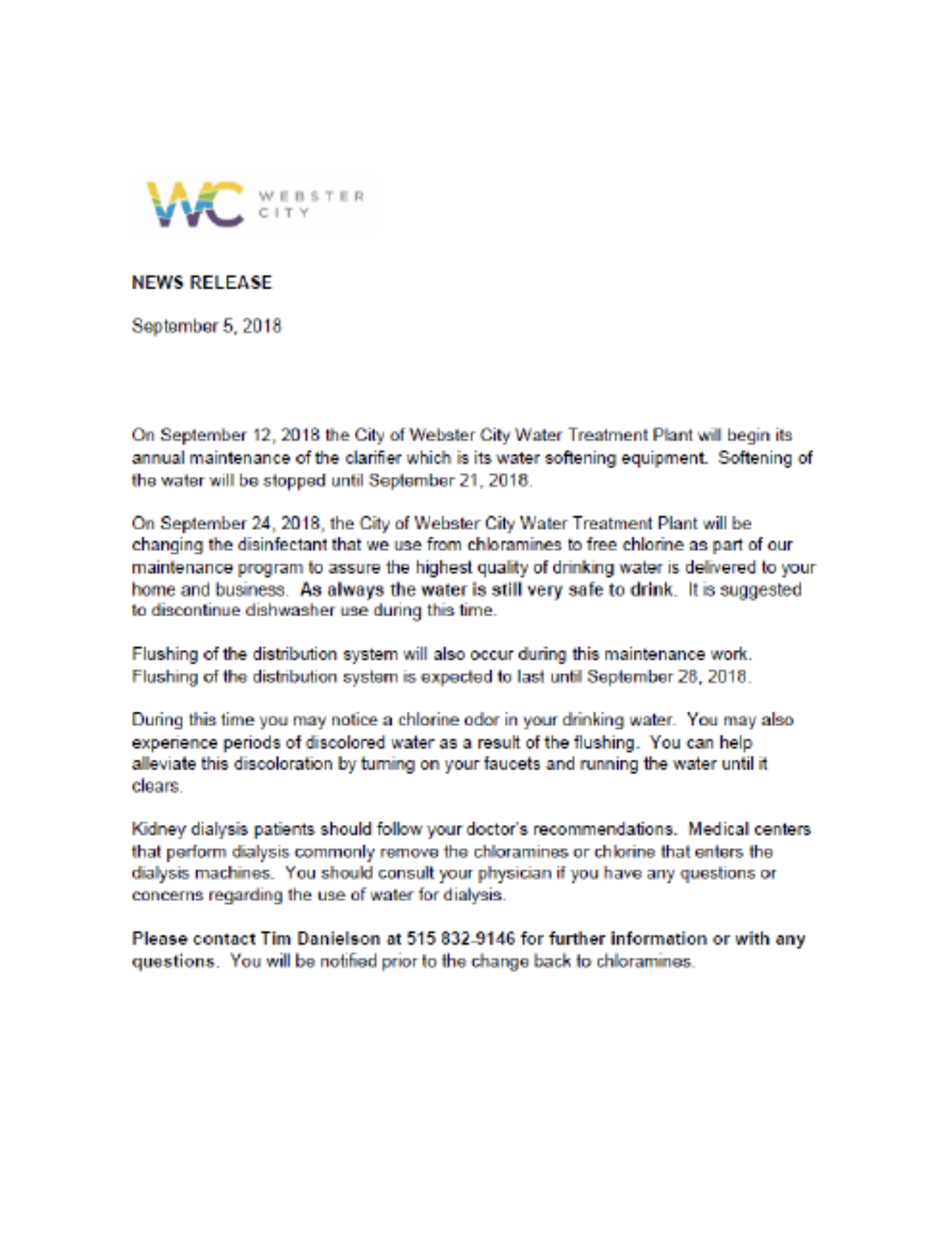 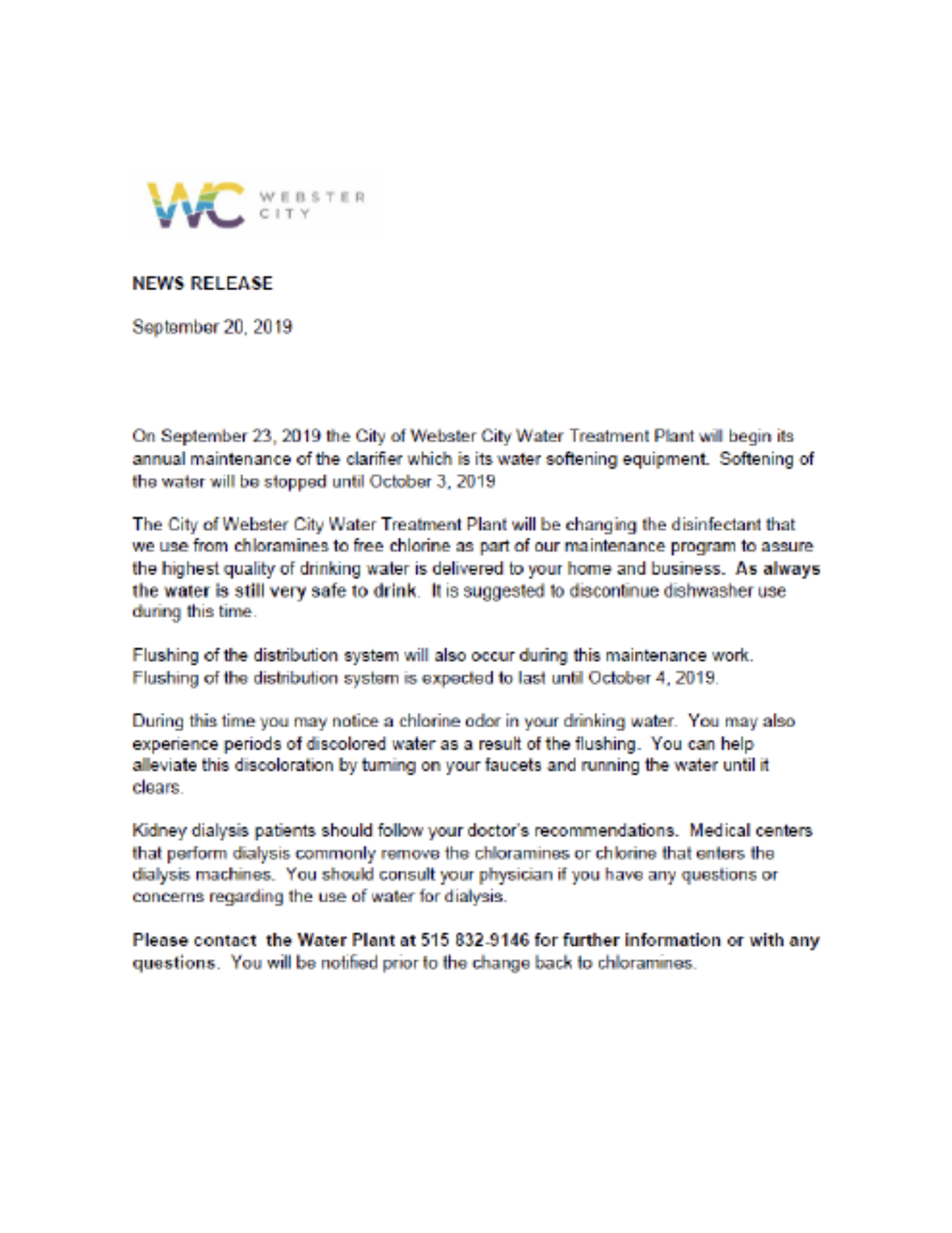 In order to meet the Safe Drinking Water Act standards a majority of cities treat their water with chemical disinfectants. Disinfection is a major factor in preventing epidemics caused by microbial pathogens. Chlorine, chloramine and chlorine dioxide are three chemical disinfectants the EPA permits to be used. These disinfectants prevent water contamination by killing disease-causing bacteria and germs such as Salmonella, Campylobacter, and norovirus and strengthen protection against other microbial contaminants, especially Cryptosporidium, which may be resistant to disinfection practices.

Chloramination is the process of adding chloramine to drinking water to disinfect it and kill parasites, bacteria, and viruses. Chloramines are a group of chemical compounds that contain chlorine and ammonia. The particular type of chloramine used in drinking water disinfection is called monochloramine which is mixed into water at levels that kill germs but are still safe to drink. Most water utilities use either chlorine or chloramines. Some communities switch back and forth between chlorine and chloramines at different times of the year or for other operational reasons.

Additional information can be found from the CDC.

We understand the frustration many citizens are experiencing. Below is a timeline of events that provides information on steps taken by the City to investigate the issue.

July 2021 – Water treatment plant staff received another notice of pinhole leak concerns in the community. Staff began reaching out to neighboring communities to identify if others had experienced this issue or had recommendations on what could be causing pinhole leaks. Water treatment staff spoke with the Department of Natural Resources about the situation and it was recommended that staff begin utilizing the Langelier Saturation Index (LSI) to identify if the City’s water is corrosive. The LSI is a measurement of water balance and determines if water is aggressive or corrosive, balanced, or scale-forming.

August 2021 – City Water treatment staff consulted with consulting engineer on the copper pipe pinhole concern. It was recommended the City perform a water well analysis. Staff completed sampling and delivered samples to the lab for the recommended analysis on August 31, 2021.

October 2021 – Reports of residents experiencing pinhole leaks in copper pipes increased in early October. The Water Treatment Plant was shut down for routine annual maintenance on October 9th. On October 13th, Iowa Rural Water Association technical support representative came to the water treatment plant to analyze the copper pipe samples provided by plumbers. He noted he would be consulting with cities across the nation requesting support and would get back to the City. After he performed some research, he believed there is some sort of electrolysis occurring but could not be certain of the cause.

While Iowa Rural Water Association representative was onsite, the City also contacted consultant engineer Bolton and Menk to report the significant increase in frequency. Bolton and Menk assisted the City in securing nationally recognized corrosion expert Dr. Marc Edwards to assist the City with investigation. The City’s water treatment plant began softening on October 19th. Dr. Marc Edwards recommended switching from a polyphosphate to an orthophosphate corrosion inhibitor. This switch was made on October 25th. Prior to making this switch, the City consulted with the Department of Natural Resources (DNR) to confirm this was acceptable. Orthophosphate is a safe chemical that acts as a corrosion inhibitor and is commonly used by water utilities. Therefore, the DNR was in agreement with utilization of orthophosphate as a corrosion inhibitor.

Once the City began utilizing orthophosphate, Dr. Marc Edwards and Bolton and Menk met with City administrative and water staff to review targets for the water treatment plant. Dr. Marc Edwards requested the City send him 5 gallons of water and pipe samples for analysis. This is a service that normally costs $15,000; however, Dr. Marc Edwards waived this fee as he will utilize the information to further pursue his ongoing investigation of copper pitting.

Lead and Copper samples were taken at 12 homes throughout the City on October 26th. Lab results came back with lead and copper levels falling below action levels. These results further confirm that the water is safe to drink.

The City has seen a significant reduction in copper pinhole leak reports since the spike in reports in the first half of October.

If you would like to report a pinhole leak, please call 515-832-9151 or email: pinholeleaks@webstercity.com.