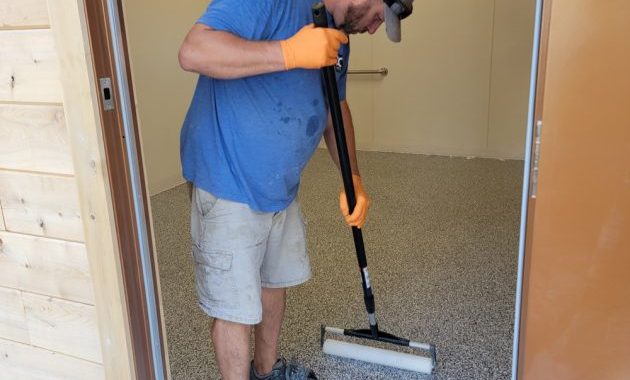 There are some shiny new epoxy floors that were installed at the West Twin Park shelter Wednesday afternoon, with the labor and materials donated by a local firm.

A crew from DCD Concrete Coatings worked at the shelter to put down the flooring in the two restrooms and the kitchen area of the shelter.

Crew member Jordan Tanner said the concrete floor was prepped with a large diamond grinder to help the epoxy materials adhere to the floor. The whole process took just a few hours, he said.

Flaws said the work on the shelter is now nearly finished. Once the new floors are dried and cured, Habhab Construction will come in to finish the plumbing work for the structure.

“He’ll finish up the sinks and the plumbing and then we have to have somebody stain and seal the exterior,” Flaws said. He said city employees installed the electrical work in the building.

The assembling of the shelter was managed through volunteer efforts led by Mayor John Hawkins, Flaws said.

“He’s done a lot of the work himself, but he’s also gotten together a lot of people in the community to help with this. The volunteers worked a lot of weekends,” he said. “The structure went up pretty quickly, but then we have all these finishing details.”

And though the city park facilities close in October, Flaws said he believed that the shelter would see some usage before then.

“I think we see it used,” he said. “It’s been a long project, but it turned out pretty nice.”

“We’re excited to use it. We’ve already had calls from people wanting to reserve it for graduations next spring,” he added.