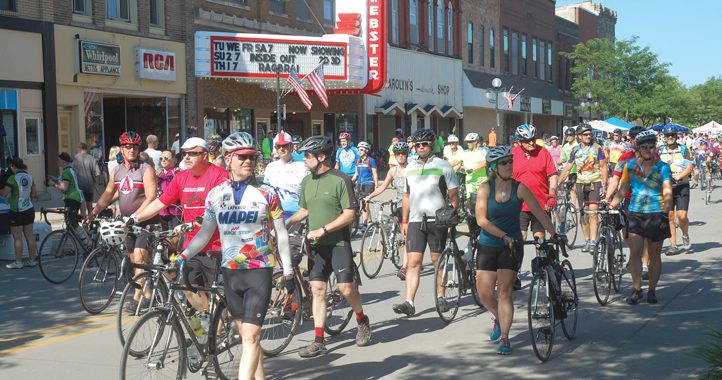 RAGBRAI’s pass through Webster City next month will be a topic for discussion during tonight’s Webster City City Council meeting.

The council will meet at 6 p.m. with the public invited to join the meeting by logging onto the Zoom platform using the meeting ID 860 1878 5471. The meeting will also be broadcast on the City’s Facebook Page.

RAGBRAI will be rolling through Webster City on July 27 after an overnight stop in Fort Dodge. The City Council is expected to approve a series of street closures to accommodate the thousands of bicyclists who will be making their way through town.

Also to go with the RAGBRAI planning, the City Council is expected to approve a resolution for the RAGBRAI Meeting Town Agreement. The agreement includes RAGBRAI reimbursing the city for up to $10,000 of associated, approved expenses.

In other business, the City Council will be considering an agreement with the Iowa Department of Transportation for the maintenance and repair of primary roads within Webster City. The agreement would be in effect from July 1 through June 30, 2026. This is an agreement the city makes with the Iowa DOT every five years. It does not transfer jurisdiction of any roads.

The City Council will consider a request from the Fuller Hall Board of Trustees to approve the replacement costs for the indoor swimming pool cover that the city purchased in November 2010. Recreation and Public Grounds Director Larry Flaws said the cover is deteriorating and will need replacing this summer. It was originally expected to last eight to 10 years and is currently in year 11 of use.

Flaws estimated that the city has saved more than $40,000 per year in utility costs for the past 11 years because of the insulated pool cover.

The pool cover Flaws recommends the City Council purchase is from Alta Enterprises of Alta, Wyoming, for $28,851, which includes the cost of the cover and installation.

During the city council meeting, there will be a public hearing on the 2020-2021 budget amendment, giving residents the opportunity to voice their opinions on changes made to the Fiscal Year 2021 city budget.