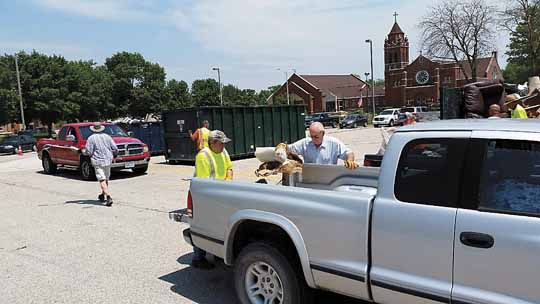 The date and time for a possible Clean Up, Drop Off Day in Webster City is still up in the air after the City Council of Webster City discussed the logistics of the event Tuesday night during the council meeting.

The council is considering a shortened, one-day event either on Oct. 3 or Oct. 10. Councilman Logan Welch suggested that the city consider having those dropping off materials do their own unloading. Mayor John Hawkins will reach out to the Trash Man to check on the availability of dumpsters and bins.

Councilman Brian Miller said the wrestling team would not be able to help with this year’s event due to concerns for COVID-19.

The location for the drop off event has been held at the Webster City Middle School in previous years when the event was held in June. This year, the council has considered using the North Alley lot behind the Senior Citizens Center.

The matter will be placed on the agenda for the Sept. 21 council meeting.

Fort Dodge Asphalt was awarded contract for the 2020 hot mix asphalt street improvement project with a big of $653,816.10. The firm turned in the lowest of two bids for the project.

The project will include Edgewood Drive from east of Superior Street at the end of concrete pavement to Oakwood Drive; Lynx Avenue in front of Webster City High School from Elm Street to Bank Street; East Second Street from east of All Cultures Equal through the intersection of County Road R35 and the 500 Block North Parking Lot from Seneca to Willson Avenue. The scheduled completion date is set for Sept. 30, 2021.

The council also approved the purchase of a Cedar Forest Project Kit to replace the open shelter at West Twin Park. Breanne Lesher, assistant director of recreation and public grounds, said the cost for the kit from ABCreative is $133,440. The 68 foot by 40 foot structure would include mens and womens bathrooms, a concessions area and covered picnic area, similar to what the previous shelter looked like.

Lesher said the city would purchase the electrical and plumbing elements separately from local businesses.

The new shelter will be shifted more to the center of the park, approximately across from McFarland Clinic, Lesher said, so as to provide better access to the facility. The current shelter is on an embankment that can be difficult for those in wheelchairs or using walkers to access, according to Lesher.

New playground equipment for Nokomis Park was also approved by the council, provided the cost is under $64,900. Lesher said the equipment would be ordered this year with an eye toward installing it early in the spring.

City Attorney Zach Chizek said he had worked with other cities on regulations for the side by side vehicles and would draft a proposal for the council.

The council also discussed the plans for opening Fuller Hall to students under the age of 15. Larry Flaws, director of recreation and public grounds, said currently only those 15 and older can use the weight room, cardio room and swimming pool. He said he had wanted to wait until school had been in session for a few weeks before possibly opening the facility to younger children.

Flaws said the building was measured for social distancing purposes and that when the time comes, there would be space for 10 people in the TV room, 10 in the game room and 20 in the gym.

Flaws suggested that as the facility’s winter hours begin in October, that might a good time to revisit the issue.

One council member suggested that setting aside a time for just the students could be one option.

The council will look at the matter next month.