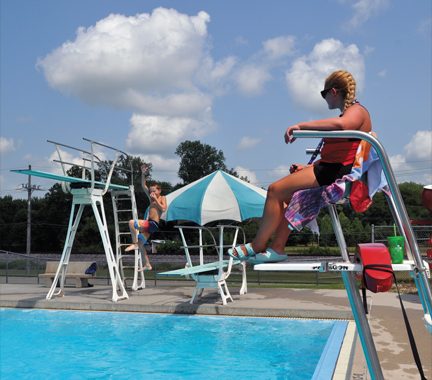 Webster City residents will have an opportunity to cool off with a dip in the pool during the hot days of summer following action by the Webster City City Council Monday night.

The council voted to open the Webster City outdoor pool for the summer, with Councilman Logan Welch offering the only nay vote. The opening, however, will come some strong restrictions for social distancing and limiting the number of swimmers allowed into the pool at one time.

Larry Flaws, director of recreation and public grounds, presented the opening plan to the council.

“So, tough decisions, tough subject,” he said, adding that he had been on the phone with many state and local officials and managers of other community pools to gain insight into whether it was feasible to open the pool in light of the COVID-19 pandemic. Gov. Kim Reynolds last week announced that pools would be allowed to open. Previously, pools were restricted opening for lap swimming and lessons.

Flaws said the majority of the pool staff is 15 to 17 years-old. There are currently 38 lifeguards for the season.

“I believe from rumor that two of them may already have COVID-19,” he said. “That makes this a little more of a tough decision considering the age group we are working with.”

Flaws said his personal opinion was that something was needed for the kids.

“My public opinion is we have the obligation to provide the community and the staff a safe environment. And I’ve looked at this and I keep going over the same things,” Flaws said.

He explained that all of the lifeguard training is hands-on, making social distancing difficult during that activity. He said that some of the communities that have chosen to not open pools were concerned with emergency situations.

He added that sudden severe weather could also cause problems, as everyone must get out of the pool and gather in the men’s lockeroom.

Flaws said his plan for the pool would allow just 108 swimmers in at a time. Children age 12 and younger would require an adult to be present with them. Following sanitation breaks at 4 p.m., a second group of 108 swimmers would be allowed into the pool for the late afternoon and evening.

The concession area would be closed and all deck chairs would be removed from the pool area. Bottled water would be the item sold at the front desk.

Admittance would be limited to Webster City and Hamilton County residents and the staff would check temperatures of the swimmers as they entered the pool area, according to the plan.

Flaws said that in previous years, on hot days, the pool could see as many as 400 to 500 people.

“On those days, it’s crazy. Everybody goes to the pool,” he said. Weather plays a big part in the attendance numbers, he added.

“I have a hard time with fairness to the public,” he said. “With just 108 people – the kids will be standing around like looking a fish bowl to see when their turn to swim will be.”

He said he also fears that people would just drop off their children as in past years, not knowing if they will be able to get in to swim.

“All of your concerns are super valid,” said Councilman Brian Miller. “But what if this is forever? In my opinion, we have to find a way.”

“Right now I’m just concerned with the next 70 days,” Flaws said. Seventy days would be the length of the pool season. The plan calls for the pool to open June 23 and close around Aug. 21, depending upon when school starts.

“With Wright County having surge and Hamilton County having 123 cases, it’s not a question of if as much as when,” Flaws said. He added that if one of the lifeguards tests positive, it would mean that the others on the shift would have to quarantine for 14 days.

“That would bring our full-time staff down to nine and then 18 parttime lifeguards,” he said.

Council members Logan Welch and Katelyn Hartmann both voiced concerns that if the pool wasn’t open, kids would find other places to swim, like the river.

City Manager Jeff Sheridan said the staff has looked at the issue of opening the pool and many different scenarios.

“This is an emotional decision,” Sheridan said. “Logically, we should close the pool. Emotionally, if we decide to open it, we’ll do the best we can.

“But I think it’s important for you to understand how many problems we think we’ll run into,” he said.

Shelby Kroona, public health administrator, weighed in via Zoom during the meeting.

“I also have concerns for your lifeguards. I also want you to be aware that sometime this summer, probably all of your lifeguards are going to be in isolation,” she said. “Not only do they congregate at the pool, those are their friends after the pool.

“You might only have two or three lifeguards who test positive, but because of this disease, they have to all isolate for 14 days. So the pool would be shut down for 14 days,” Kroona said.

Kroona said the number of COVID-19 cases in Hamilton County are “exploding.”

“And it’s not in the older age group, it is in the much younger age groups. When I do contact tracing with teenagers, it is very difficult to get who they have been with for the last 10 days,” she said.

Hartmann said that with so many asymptomatic people, it may be impossible to prevent the spread of the disease.

Kroona said she thought Flaws and Sheridan had done a great deal of work trying to figure out how to open up responsibly.

“Obviously, it’s up to the council,” she said.

Hartmann said opening the pool would also offer a sense of normalcy that was really needed. She also added that it was the parents’ responsibility to decide for their children.

The council approved the opening of the outdoor pool as presented in the plan.