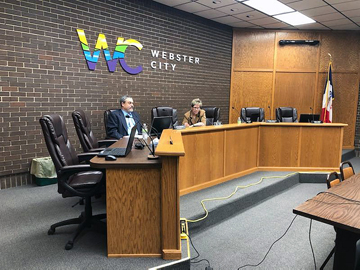 Following some technical difficulties, the Webster City City Council was able to successfully hold its Monday night meeting via cell phones as all five council members stayed home and called in for the meeting.

One council member was ill, three work in the health care industry and the fifth stayed home to avoid COVID-19 coronavirus risks.

At the start of the meeting, City Manager Jeff Sheridan announced that starting immediately, City Hall will be closed to the public. All utility and other city payments can be made in the drop box located on the west side of City Hall.

All city buildings are also closed to the public and all city board and commission meetings are canceled, but may be rescheduled to a virtual meeting format.

In other business, the city council held a public hearing on the proposed plans, specifications and cost for the 2020 Wilson Brewer Park Grounds Improvement Project, which consists of installing a trail system throughout the park and parking along Ohio Street.

No members of the public attended the hearing and no written objections were field beforehand.

The council then awarded two contracts for the project. The first contract is for $13,470 to Habhab Construction of Webster City to install the eight-foot-wide trail and sidewalk system running through the park. The second contract was awarded to Castor Construction, of Fort Dodge, for $162,418.35 to add 21 parking spaces along Ohio Street.

The council also approved a resolution to sell city-owned property located at the east end of Cherry Street to Tanner Tempel and Mike Tempel.

The three-acre parcel had been a city dump site in the 1930s and had been leased to William Smith, 509 Cherry St., since May of 1976 for $1 a year. Smith recently passed away and the property was offered for sale to the highest bidder, which was the Tempels for $6,000.

The money from this parcel will be added to the city’s general fund and the city will now be able to levy taxes on the property.

The city council approved resolutions for the city to enter into agreements with Hamilton County and Koloni Inc., of Pocahontas, to establish a bicycle share system in Webster City. Three stations will be set up — two in Webster City and one at Briggs Woods.

The city’s funding for this project will be the community vitality 2019 budget.

During Monday night’s meeting, the city council also set two public hearings for April 6: one for a proposed offer to buy city-owned property located on East Dubuque Street, and one for a proposal to enter into a road use tax revenue loan agreement and to borrow $4,300,000. Those public hearings will be at 6:05 p.m. on April 6.