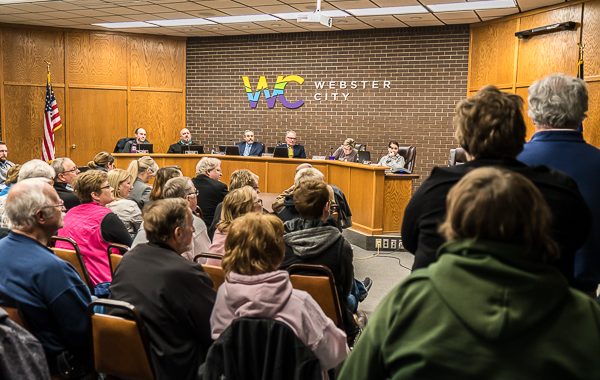 The people spoke …. and the council listened

On the agenda was a public hearing on a resolution for the council to accept an offer from The Overland Group, a commercial developer out of Birmingham, Alabama, to purchase the northernmost 1.25 acres of East Twin Park to build a new, larger Dollar General store on the 1100 block of Superior Street.

Nearly all the 60 seats set up for audience members were filled with still more than 30 minutes to go before the start of the meeting. People began filling in along the sides of the city council chambers, in the back of the room and in the halls outside the chambers. Some held hand-lettered posters declaring “Save the park” and “Webster City is not for sale.”

Prior to the public hearing, city clerk Karyl Bonjour noted that city staff received eight written objections from community members. She also noted the petition on Change.org started by Zoami Calles Sosa, a member of the Webster City Parks and Recreation Commission, had amassed approximately 1,200 signatures, although around 300 of those are from non-Webster City residents.

The council opened the floor for residents to approach the lectern and share their support or opposition on the matter.

Webster City resident Gary Groves was first to address the council, stating that with the park’s establishment in 1857, it is the oldest park in the city and played “a major part of the early years” of the community. He said while “it’s fair to say in recent years” that the usage of East Twin Park has been lacking, he does not favor the sale of the land to a private entity.

Noting that “passions run high in this community,” Groves urged extreme caution to the city leaders to not take such a decision lightly. He called for the city council to be more transparent to the community and to ask for park commission input.

Sosa addressed the council on her concerns about the possible sale and how the city council handled the process, saying that the council had been less than transparent and “kind of shady” about the deal.

“The park belongs to the people and I fundamentally believe that,” Sosa said. “No park should ever be sold without asking us first if it is even for sale.”

Sosa was punctuated with applause as she concluded, “There will always be another Dollar General, but there will never be another East Twin Park.”

Annastacia Iverson, 14, came to the meeting to give voice to the city’s youth.

“I’ve talked to more than 50 youth and most do not want to lose this park,” she said.

Iverson recommended the community hold fundraisers to raise money to improve the park. After the meeting, Iverson set up a GoFundMe page to raise $50,000 to revitalize East Twin Park.

Sarah Trueblood, who lives near the park, told the council that the narrative that East Twin Park was rarely used was incorrect. Trueblood told the council she sees kids in the park all the time, skating in the skate park and playing basketball on the court.

Throughout the hearing, several community members asked the council what they wanted their legacy to be.

On Facebook prior to the meeting, Bryan Spangler, owner of Spangler Automotive, challenged local donors and businesses to match his $20,000 pledge to get new equipment for the park if the council chooses to not sell the park. Jeff MacRunnel, Spangler’s business partner, shared Spangler’s offer during the meeting.

A total of 28 people addressed the city council during the meeting. Not one member of the public spoke in favor of the proposal.

Following the public hearing, the council expressed its appreciation for the members of the public who attended the meeting and voiced their concerns.

“The youth blew me away tonight for sure,” council member Brian Miller said.

Council member Matt McKinney highlighted that the purpose of a hearing is to hear from the public and that he appreciated the discourse from community members.

“It’s not an easy decision,” he said. “Our job is to weigh the offers and weigh any of the things that come to us and make the best decision possible.”

City Council member Logan Welch was not physically present for the meeting, having prior work commitments out of state, but attended the meeting via phone call.

“A lot of things look good on paper … and I think without this showing, I don’t think we really would have realized the ramifications … without everybody showing up and talking,” Welch said.

Miller made a motion to table the resolution with the intention of going back to the developers to look into alternative locations, which was met with loud vocal responses from the audience urging the council to hold the vote that night.

“We just heard some of the most emotional statements we’ve ever heard in the six years I’ve been on the council … we can turn this down now,” Welch encouraged, opposing the motion to table the resolution. “Let’s do the right thing here tonight, people.”

Following a short but contentious debate on whether to vote on the resolution as it appeared before the council on Monday night or to table it and come back to the issue at a later date, the city council did ultimately unanimously vote no to the resolution authorizing the execution of a purchase and sale contract and subsequent warranty deed conveying the city-owned property to The Overland Group.

The vote was followed by cheers from the crowd, with one audience member shouting, “You did the right thing.”