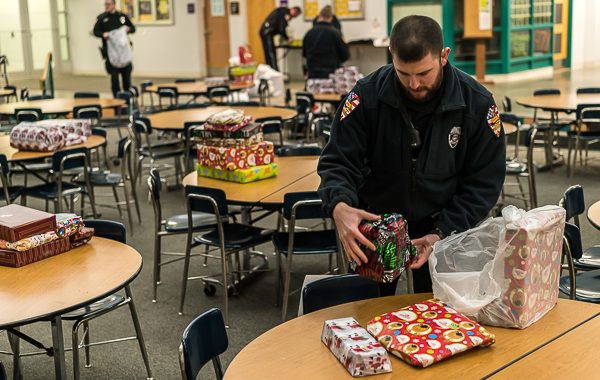 There were festively wrapped presents and treats for all as members of the Webster City Police Department held its annual Christmas gift distribution for area children Wednesday night.

The BLUE program or Blue Light Uniform Event has been held for about the past five years, according to officials. Sgt. Eric McKinley has headed up the program for about four years.

Each year, the police department asks area school officials who nominate children could benefit from the taking part the program. This year, there were 21 children involved.

In previous years, when Kmart and Shopko were open, the children were paired up with officers for the shopping trip to find presents for family members. Then volunteers would wrap the presents before they were sent home with the children.

This year, with the closure of the two stores, officers reached out for suggestions from the families of the children. The officers then took the lists to shop for the children.

Wednesday night, the children and their families were invited to the Webster City Middle School to pick up the gifts, enjoy some refreshments and spend some time visiting with the law enforcement officials.

According to organizers, the event was designed to promote a positive relationship with law enforcement so that children are not afraid of the officers.