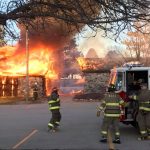 Yesterday, just after 1900 hours, Kamrar Fire Department was notified of a building on fire at 2501 Briggs Woods Rd. While enroute, Kamrar Fire requested mutual aid from Webster City Fire Department. Engine 33 responded to the fire, and upon arrival, found one of the golf cart shacks fully involved. Kamrar FD was already on scene and was beginning fire attack.

WCFD acquired a water supply from a hydrant on scene and began to assist Kamrar FD with fire attack. They pulled a 21/2 inch line, 2- 11/2 inch lines and deployed the master stream on the engine. This allowed up to 1700 gallons per minute to be put on the fire. T30 arrived on scene and took command. Another line from Kamrar FD was also used to protect the West cart shack exposure.

The fire was under control in a matter of minutes. Extensive overhaul and putting out hot spots was conducted. Kamrar 1 the Fire Chief arrived and command was transferred to him. WCFD transferred the scene to Kamrar FD and was released by command. Kamrar FD continued to work on finishing overhaul, and then cleared the scene.

Because of the great work from Kamrar FD and WCFD the fire was contained to the one building and just partial other. At this time the cause of the fire is under investigation but will likely be undetermined due to the extent of damage incurred.